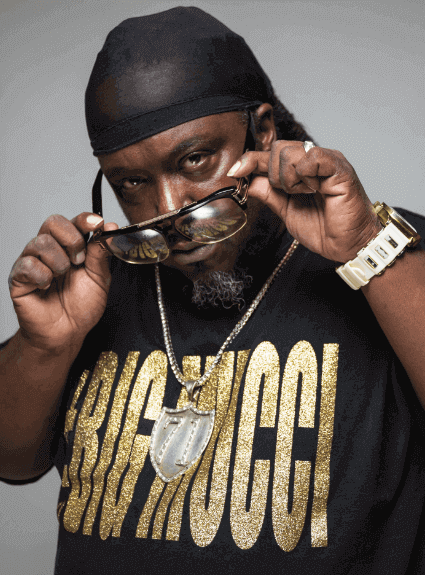 Mark Wynn better known under his stage name Big Mucci is an American choreographer, producer, recording artist. Born in birth place of Rock & Roll (Cleveland, Ohio) Big Mucci served his country as a United States Marine. After returning home from serving his country, Big Mucci formed his line dance rap group called 71 North releasing his 1st album in 1998 “It's all Boodilicious” and his second album “Watch us Roll” in 2000 with his lead off single the Cleveland Shuffle that reached #44 on the top 100 Billboard charts. In 2004 Big Mucci has embarked on a successful solo career, selling more than 2 mil records over his career. Big Mucci is praised for the quality of his choreography, flow and beats that is considered as beginners and intermediate line dances (meaning easy for everyone can do).

Big Mucci's ‘Line Dance’ phenomenon has allowed him to be able to travel across the USA and the world putting boots, sneakers, dress shoes and high heels on the dance floor. He developed and perfected the formula of writing & recording perfectly phrased songs accompanied with his line dance choreography that was not only ‘dancer friendly’ but ‘radio friendly’ as well. There isn’t a dance floor in the world that has not felt or heard the sounds of that formula with Cleveland Shuffle, The Bounce, Bikers Shuffle, The Birthday Slide, Breast Cancer Awareness Shuffle, Line Steppers Slide to name a few.

In 2009 he release 4th Album “Shuffle Step Slide: The Linedance Movement” with his lead off track the “Bikers Shuffle” which has over 20 million combined Youtube views, over 100 million streams with sales reaching 2 million. March 2019 Big Mucci will be relasing his 5th studio album entitled “Big Mucci the LineDance Movement 2” which is a 10 track album dedicated to the Line Dance world with songs such as the Rebirth of the Shuffle, Mickey James and the Breast Cancer Awareness Shuffle the Big Mucci dedicated to his Mother who passed away from Breast Cancer in 2017.

Today it is nearly impossible to go to any club, wedding reception, fitness center, cook outs or even taking your family on a cruise without hearing and seeing people dancing to Big Mucci’s family fun Line Dances. Besides performing continuously and being called upon by many music greats for collaboration on new music, Big Mucci has shared the stage alongside some of hip-hop, r&b, pop and blues most respected and revered legends further more lets you know Big Mucci’s time is here. With over 25 Line-Dances under his belt and more to come Big Mucci is in a lane all by himself with no competition bringing a new level of fun, fitness, enthusiasm, energy, and artistry to the entire world.