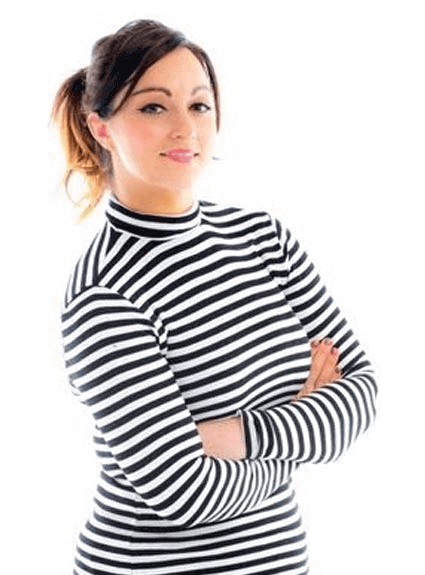 Hayley has danced for as long as she can remember. She started tap and ballet classes at only 3 years old and has very early memories of annoying her parents, as she practiced her "taps" on the bathroom lino.

Hayley has danced for as long as she can remember. She started tap and ballet classes at only 3 years old and has very early memories of annoying her parents, as she practiced her "taps" on the bathroom lino.

She went on to perform then later compete in several forms of dance. In 1995 Hayley and her mum (Judith)were visiting Canada when they saw line dancing for the first time. Her mum - a health and fitness coach at the time - decided to look more into this exciting, new form of dancing. Judith became qualified to teach line dance that year and started her own classes. Hayley, however, was adamant that line dance just wasn't for her (but still helped out at Judith's classes). Two years later in 1997 Hayley was coaxed onto the class dance floor for the first time to learn an easy dance, "Elvira". Hayley took to it right away... She was hooked! Hayley began competing in line dance and then with her mother's encouragement, took her teaching qualifications too.

In 2000, a local council-run leisure centre was looking for a qualified teacher to run a new line dance class. Judith, also an English teacher, could not take on any more work so volunteered her daughter. Hayley, then only 16 years old, still remembers the shocked look on the dancer's faces the first day that this "little girl" walked in to teach them. But it wasn't long before the class embraced Hayley as she did them and the rest, so they say, is history.

Hayley also studied the UKA medal programme in line dance, achieving gold bar level 2. In 2000 she gained her choreography certificates. It was believed she was then the youngest student in the UK to pass these with a distinction. This gave Hayley the choreography bug and in 2001 her first dance recognised nationally "Cupids Arrow" was printed in Up Country magazine. More of her dances then went on to be printed in Linedancer Magazine and the BWDA magazine.

In 2002 Hayley spent some time abroad following her yearning to dance and travel. It was on a holiday back home to the UK, during christmastime 2003, that she met her husband-to-be Phillip and went on to change her name from Hayley Kennedy to Hayley Wheatley.

Over the years they have had three lovely children Luke, Ella and Ava. In 2006 the family moved back from where they were living in West Yorkshire and Hayley set up a dance school in Hartlepool (where she lives today). At her school, Dance First Academy, Hayley taught many different genres of dance (from contemporary to hip hop) but when asked what was her favourite form of dance she would always say "line dancing."

Between the space of time when Hayley had moved abroad in 2002 to 2011, Hayley had continued to teach line dance but never choreographed anything new. One night Hayley and her daughter Ella (then 5 years old) were watching a TV show when a song called "The Last Waltz" by Engelbert Humperdink came on. Ella kept singing the song insisting that it was her favourite tune and that her mum should "make a linedance" to it. At Ella's persistence, Hayley choreographed a dance that she called "Ella's Waltz" and posted it online. The response over the dance was more than anyone could have predicted. Videos of the dance popped up online and the dance went to top of the charts in several different countries. Hayley was then asked if she would teach the dance at festivals, friend's classes and events.

Hayley found a revived love for choreography and started writing more dances. She was asked to teach at even more events and found her diary was filling up fast with line dance related things. In September 2014, Hayley made the hard decision to give up her dance school and line dance full time. She now has classes in her local area (that all are welcome to) and enjoys travelling to new places to teach her dances. She has no regrets as she now contininues to embrace her passion. She likes to encourage others to do the same and will often recite the dance quote..."Dance with your heart and your feet will follow".

Click on 'view' to see event information. When using mobile devices, swipe sideways to view all details in list. It is advisable to confirm events are running before travelling.

The latest dance by Hayley Wheatley is a Improver level 32 count 4 wall line dance called ATLANTIC CHA.
Music is Bury Me In Blue Jeans by the artist, Midland.