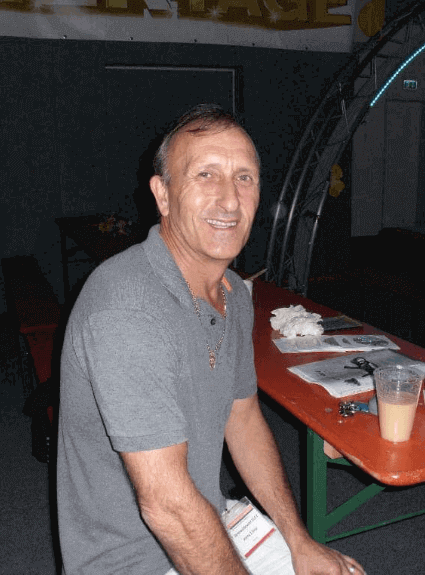 Well, what can we tell you about Johnny that you don't already know? Johnny as been dancing since a very early age i was 13; training at the Pineapple dance studio in London under the supervision of Arlene Phillips. Johnny to...read more

Well, what can we tell you about Johnny that you don't already know? Johnny as been dancing since a very early age i was 13; training at the Pineapple dance studio in London under the supervision of Arlene Phillips. Johnny took up line dancing after a family holiday to America, where he first encountered line dancing in a local bar. As a dancer, Johnny was intrigued and he knew he had to learn this form of dance.
So the story begins.... On returning from America he opened up his own line dance club, along with some friends and things just went from strength to strength. Shortly afterwards Johnny was given the name that we now all know and love "Johnny Two Step". This came about from some individuals not knowing Johnny's full name, and when trying to describe him to others they would say "You know the one I'm talking about, that Johnny who's always Two Stepping" and so the name Johnny Two-Step was born.
After becoming a qualified and established teacher Johnny was off on his travels to America and Canada. During this trip Johnny had the pleasure of meeting the one and only Max Perry. A true friendship developed and soon afterwards Johnny had invited Max over to England to tour around the country, teaching people the enjoyment of Line dancing. Johnny has introduced many now famous names to the Line Dance circuit, to name but a few - Miss Scooter Lee, Miss Jo Thompson, Mr Hillbilly Rick and not forgetting Johnny's self adopted mum Jean Garr.
Johnny is a true showman in everything he does. His ability to dance alongside the young and old and make them all feel totally at ease is a true credit to him. Johnny's dedication to line dance is outstanding and a close insider has told us that the man just never stops dancing.
Johnny was voted Male Line Dance Personality 1998 for the second time. He ran the British Line Dance Championships along with A.C. Clarke and the British Line Dance Display Team. During the early rounds of the competitions Johnny was taken ill with a collapsed lung, thankfully for us, after a lot of care, Johnny recovered to go on from strength to strength. In January 1999 he took part in the UCWDC World Championships in San Antonio Texas USA, and won the title of Male Diamond Showcase World Champion. In 2000, Johnny won the Title of Diamond Advanced World Champion and retained his previous title of Diamond Male Showcase World Champion. In January he became the Northern Lights Renegade Champion competing against some of the most talented dancers in the UK. Johnny also won the titles of Male Diamond Classic Advanced & Male Diamond Showcase Champion. And I was the first male Crown world champion
Johnny has been a regular instructor at the Line Dance Marathon over many years. It is the highlight of his year to be part of the Marathon. He was a frequent visitor to the Schonfeld Line dance and Country Festival in Germany.