Send a direct Donation or payment to Rob Childs to help them financially survive the current Coronavirus situation. 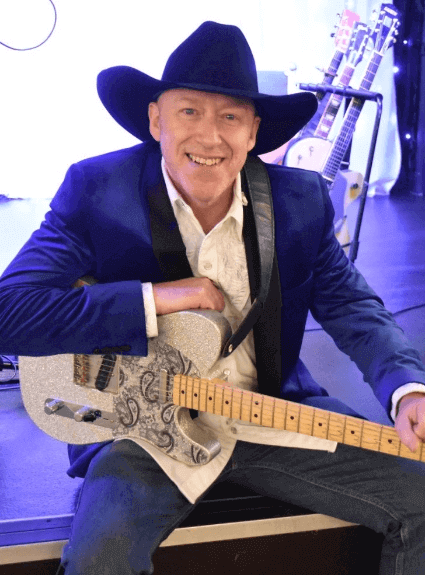 Rob has been a UK based country guitarist, steel player, bass player and singer most of his musical career. Starting with his first band back in 1978 Max Headroom and the Car Parks, an odd mix of Essex Rn’B and Country Roc...read more

Rob has been a UK based country guitarist, steel player, bass player and singer most of his musical career. Starting with his first band back in 1978 Max Headroom and the Car Parks, an odd mix of Essex Rn’B and Country Rock, he joined his first fully fledged country band Greta and the Stray Shots in 1985 and they were a fixture on the British country music scene for over ten years. Rob then teamed up with US singer and guitarist Sid Griffin, Sid had great international success with his Los Angeles based country rock band The Long Ryders, and the Coal Porters were his new band after they split. After 4 years as a Coal Porter, Rob and Nadine Somers formed the Nadine Somers Band back on the country circuit proper and with Bob Keeley they became extremely popular, winning many awards. Nadine left to have a family and he and Bob continued as Vegas. After a change in personnel (Andy Saphir - now on guitar in the Visions of Elvis theatre show), Nadine returned for a year or two and the duo became Lass Vegas. handing over the Lass duties to Marie Saunders in 2011 right up to Dec 2019. Rob and Nadine are now back as an occasional duo.. and Rob is working all over the country with his Solo show.

In addition, he has backed many artists in country music and in musical comedy with US Comic Rich Hall and playing in venues around the world, including Opryland in Nashville, New York's Broadway, Glastonbury, Hammersmith Apollo, Shepherd's Bush Empire, The Royal Albert Hall, Sydney Opera House and London’s O2 Arena. He has numerous recording, TV, Radio and DVD appearances to his name.

New install in response to the Coronavirus Situation. Virtual online events. When using mobile devices, swipe sideways to view all details in list.