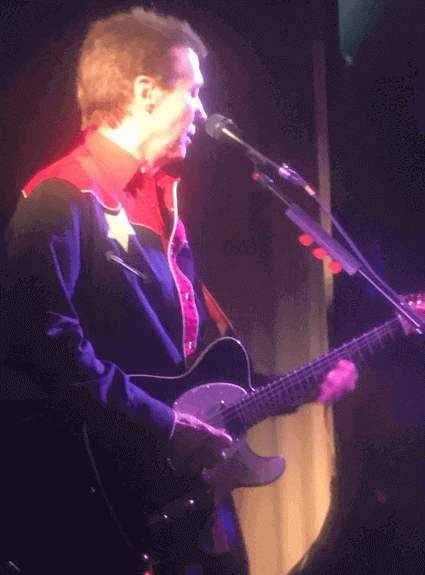 My name is Tony Crooks, and Im a singer/guitarist who has spent the past 15 years working with Plain Loco - you probably know me as ʻthe quiet oneʼ in the duo, but after a long and successful partnership, Plain Loco decided...read more

My name is Tony Crooks, and Im a singer/guitarist who has spent the past 15 years working with Plain Loco - you probably know me as ʻthe quiet oneʼ in the duo, but after a long and successful partnership, Plain Loco decided to call it a day at the end of 2013 and I embarked on a solo career from January 1st 2014. Iʼm writing this biography to offer you some information on my background and where I hope to go from here.

I began playing the guitar at the age of 9, and after several years learning the basics, progressed to classical guitar, after which at the age of 12, I decided that I simply had to have an electric guitar in order to become a successful, famous (and no doubt, rich) musician! I began to meet other budding local musicians, played in the ‘school group’ of course, and at the tender age of 14, joined my first working band. With more than a little help from my parents, I began playing around my home area of North Wales in clubs, hotels and holiday camps (weekends only of course!)
This was the late 70ʼs - and we played whatever was in the charts at the time - pop, rock, blues, soul, a diverse mix which was a great overall grounding for a young musician. As time went by, I began to work with older, more experienced musicians and by the age of 19, I was working 4 nights per week all over the North West, whilst still holding down a day job.

After progressing to more original ideas with several local bands, In 1986 I moved to London in order to follow a more ambitious musical path and eventually auditioned as lead singer/guitarist for a new band being formed by Leo Lyons, a founder member of the late 60s Rock band Ten Years After - who had been a hugely successful part of the British Rock & Blues scene of that time, with several gold albums, many American tours and an appearance at the famous 1969 Woodstock festival to their credit.

Our band was called The Kick and we worked together for 8 years, recording several CDs which were released in Europe & Japan, with tours and festival appearances in Germany, Austria, Switzerland, France

and Belgium. In this area of the music scene, work is irregular and between these trips I worked as a printer, platemaker, driver, painter, whatever was necessary to secure an income when the band weren’t travelling.
Our CD ‘Tough Trip Through Paradise’ can be downloaded from iTunes

The Kick eventually disbanded, but Leo and I continued to write songs together, mostly for the Nashville market, having become interested in Country music over the years. One of the songs we wrote became the title track of Plain Locoʼs 2001 CD, Blue Memory. After some recording and writing work for 60ʼs singers such as Chris Farlowe, and Colin Blunstone, I then spent 2 years working with a London-based rock band called Never the Bride who were signed to the major MCA recording label and with whom I recorded, and also toured in the UK, Europe and the USA.

In 1997 after a difficult personal spell, I decided I needed something more concrete - my love of Country music had grown over the years, and a chance ʻstand-inʼ job with Plain Loco - who were then a 4-piece band - led to a permanent position. By 2002, Plain Loco had become a duo, sharing lead vocals between Steve and I, and have remained so ever since, working all over the UK at country music clubs, major festivals & linedance events, and also running our own successful ʻweekendersʼ for the past 10 years.
All things change however, and I am now a solo artist, producing all the backing music myself at home as I did with Plain Loco, singing songs for people to dance to and listen to - but i hope above all - enjoy as much as I do.

Its certainly been a new start for me, and with my own individual backing which i produce entirely at home, lead vocals and live lead guitar playing, I intend to continue working regularly all over the country.

Musically, my preference is for what I would call just ‘good music’ - I have no interest in the ‘here today gone tomorrow’ pop music that has risen its head of late, so my material will be mostly Country - some modern, some classic, some non - country too, but good music. I shall also include a fair amount of material that not everyone else plays. By now, listeners and dancers alike must be growing tired of hearing such similar setlists from many different artists on our circuit.

We’re all different, artists should be individuals like everyone else, and I hope that a wider variety of material goes some way towards that goal.